Senior Scouts is where the action is!

With a programme specifically designed to be challenging it encourages individuals to ‘look wide’ and be adventurous. Much of the work they do is aligned to the Duke of Edinburgh scheme which can be found in that section of the menu bar. Seniors are encouraged to develop skills for life and to be self motivated. They must have a ‘can do’ attitude to progress through the programme.
Following their time in Senior Scouts they can then move on to become a Rover Scout or elect to become a Young Leader.
Senior Scouts have the same Law & Promise made by Scouts but their motto is different.

On My Honour I promise,
That I will do my best,
To do My Duty to God and The Queen,
To help other people at all times, and obey The Scout Law.

1. Understand the Scout Promise and Law in accordance with his age and development.
2. Have a knowledge of the life and work of B-P and the broad outlines of the history of the Movement.
3. Have sufficient knowledge to train a boy or girl of Scout age in the Tenderfoot tests.
4. With at least 3 other Seniors, one of which will make a report to the S.M.(S), go on foot across country or by boat, sailed or propelled by himself a total distance of not less than 22 kilometres, carrying his kit and sleeping out (in tent, hut or barn according to season) for not less than one night, lighting a fire and cooking for himself and his companion.
5. If not previously a Scout, the Scout must have spent a total of at least 3 nights away from home in the company of Scouts (if possible Senior Scouts) sleeping in a tent, hut or barn, or similar shelter.

The Senior Scout should:

1. Complete an adventure journey as a member of a Patrol in which he shall play a leading part. The journey, which may be short in length, must include at least 5 "incidents" such as rescues, from fire or heights, compass work, night work, decoding.
2. Be reasonably proficient in 2 of the following. Each of the 2 must be selected from different groups, as under:
a. Boxing, fencing, wrestling, judo.
b. Rowing, riding, ice-skating, roller-skating, sailing, gliding, canoeing, car-driving and motor cycle riding.
c. Swimming, diving.
d. Gymnastics, tumbling.
e. Rock climbing, rope-spinning, caving.
f. Track athletics, field events, cross-country running.
g. Rifle shooting, archery.
3. Be able to perform 3 of the following:
a. Climb a tree to a height of 9m from the ground.
b. Vault a fence two-thirds his own height.
c. Throw an 18½m line to fall between 2 pegs 122cm. apart at a distance of 15½m. twice out of every 3 times.
d. Swim 18½m wearing clothes.
e. Climb a rope to a height of 4½m from the ground.
4. Make a journey of at least 32 km on foot or by boat, with 3 other Scouts, route must be one with which the Scout is not familiar and should, if possible, include stiff country. Sleep out, using only kit carried in rucksack.
The Examiner may set the candidate 1 or 2 tasks which require a specific report but no general log of the journey is required. The journey must be such as will constitute a definite test of determination, initiative, and self-reliance.
Or
Pass the Senior Scout Hiker Badge.
N.B. - All hikes must be checked by person holding B-PSA Safety on the Hills Certificate.

The Bushman's Badge is a leather braid worn on the right shoulder.

Before being awarded the Bushman's Badge, a Senior Scout must:

The Discovery Award is for Senior Scouts and Rover Scouts.
It is a 4 day expedition of hiking and adventurous Scout challenges which tests the participants' stamina
It is a National event that any Senior and Rover Scouts can participate in and consists of:
A four day expedition in difficult country, on foot or part by cycle.
Senior Scouts / Rover Scouts will be self sufficient and must be able to navigate to a high standard.
At the conclusion of the expedition a Log of the journey is required. Successful Senior Scouts / Rovers, will be awarded a badge and certificate.

1. Be at least 17 years of age.
2. Hold the:
a. First Class
b. Bushman's Badge
c. Ambulance Badge
d. Three Public Service Badges
3. In the opinion of the Group Council be setting a personal example of the Scout way of life.
4. Attend the St. Georges Award Assessment Weekend
5. In order to receive St. Georges Award a completed St. Georges Award Record Card must go to HQ Commissioner for Senior Scouts

The B-PSA believe that our uniform badges are there to fulfil two functions; to identify ourselves geographically/ by section and to recognise achievement.

Badges of attendance at events and camps or commemoration and celebration do not fulfil this criteria and are thus at the discretion of the National committee and will only be authorised for significant events and only for a 1 year duration.

All badges obtained for attending camps, centenary or jubilee should now be removed from uniform and transferred to camp blankets.

Anyone wishing to wear a badge that is not supplied by B-P Supplies (Badges) or previously approved by the National Committee should put a request to the NC via their Area Commission.  Badges approved to be worn: 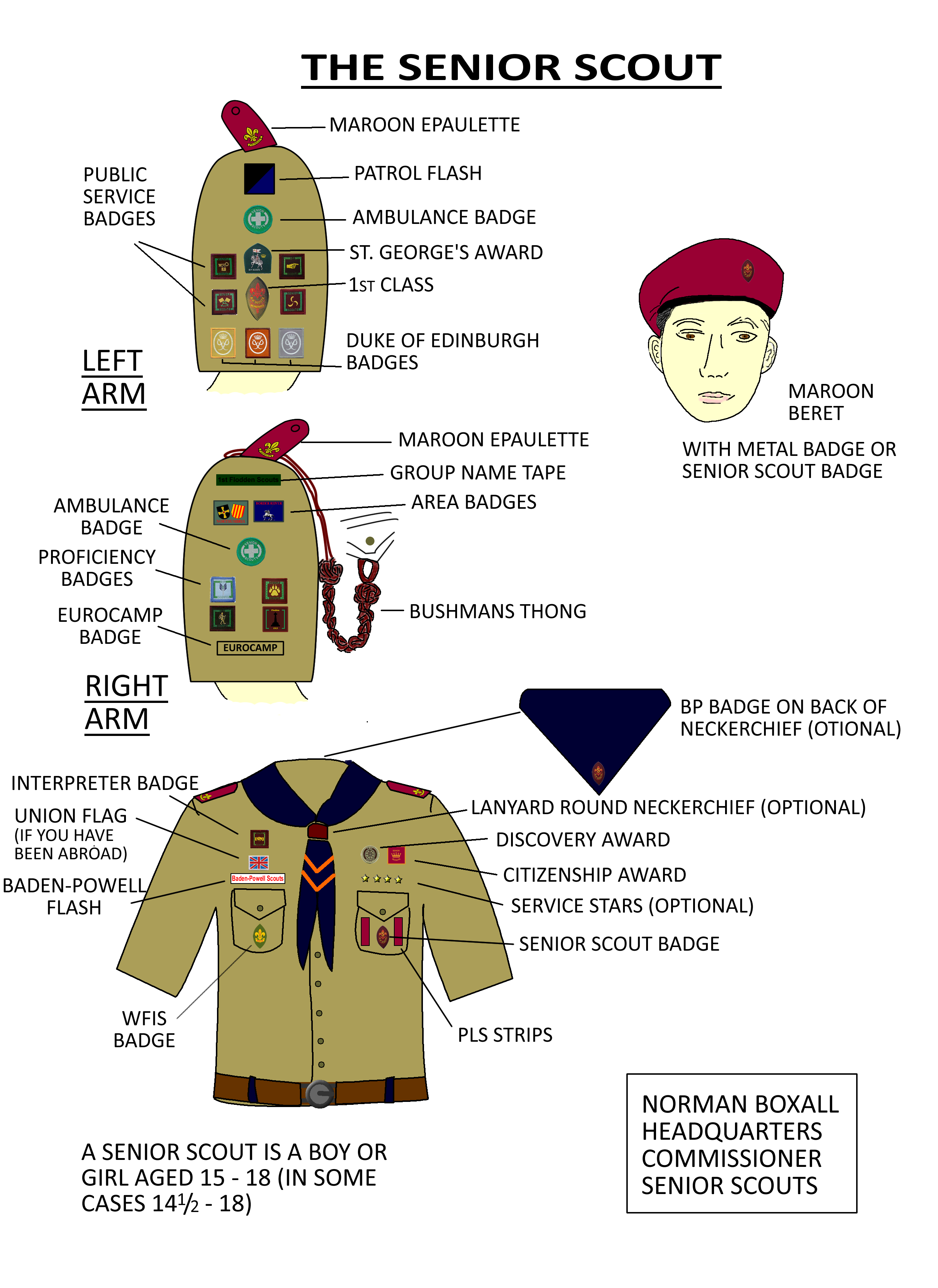 You can download a copy of The B-PSA Camping Handbook by clicking here.

You can download a copy of Skills for Expeditions in Remote Countryside (SFEIRC) by clicking here.