At the end of an action-packed term of summer scouting, 16 members of 1st Whittingham BP Scout Group loaded up their rucsacs to take part in the main event of the World Federation of Independent Scouts for this summer – ‘EUROcamp 2010’ – a scout Jamboree in Germany, camping with 1300 scouts from all over the world – Canada, Russia, Italy, Germany, Switzerland, Mexico, Belgium, Czech Republic, England, Spain and Denmark.

Upon arrival in Germany, 1st Whittingham’s contingent received a warm welcome from Klaus Tegeder, Scout Master of Stamm Tecumseh, the local scout troop. We pitched our tents at the top of the hill with wonderful views of the huge camp, the woodland, village of Hundsdorf (between Cologne and Frankfurt) and the bison that the farmer was grazing on the adjacent field!

The programme of the camp was centred on the camp motto – ‘Scouts – courteous and bold’. It included an incident hike, large-scale pioneering projects, and an exciting medieval wide game. Each nation put on their own knight costumes and made their own weapons in order to win a competition held between four sub-camps. For a whole day, we were seeking for the King’s Gold, defending ourselves against robbers, and producing jewellery to trade with at the Castle. At the end of the day, the Sub-Camp Counts weighed the gold to find the winner! We also had lots of fun campfires, singing our own songs and listening to songs from other countries, taught English games to the German scouts, and learnt some from them, and swapped lots of badges and neckerchiefs for souvenirs!

The most memorable day on camp was the international workshop day. The Russian contingent dressed up in national costumes and cooked potato pancakes, the Sicilians also wore national costume and served up olives and sun-dried tomatoes. The English played croquet and served afternoon tea. The Danish scouts offered candle-making workshops, the Czechs demonstrated some fire-lighting techniques, and the Germans showed us how to make string out of nettles! One of our Scouts, played and talked about his Northumbrian Pipes!

Besides the camp programme, we took part in various other activities. We took a boat trip down the Rhine to see the romantic castles, visited the Ahr Valley and its vineyards, descended into the depths of the earth into the crystal caves, canoed and pedaloed down the Lahn River, and as a final treat flew around Phantasialand on roller coasters!

As our ten days in Germany came to an end, we had a final meal together in a local restaurant and reflected on this wonderful experience and all the friends we had made from all over the world. We hope to see our German scout friends soon here in Northumberland, and others at future Jamborees. 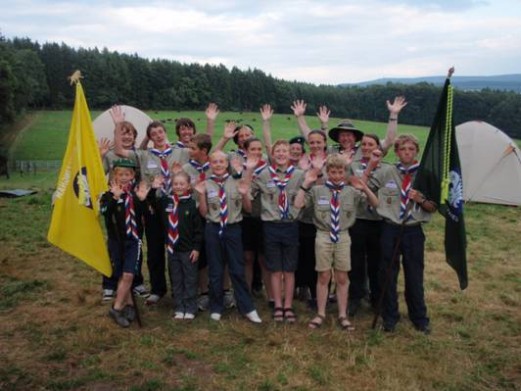