Friday 12th June saw six groups from Northumbria meet near to Heighington, to partake in a weekend of green field camping.

The site was accessed from a field gate & a short drive down the hill (over long & lush grass) to the bottom of the field, which was flat & more importantly out of view of the road – good choice! A small amount of woodland provided lust the right amount of wood for fire pits

The groups set up around a central flag leaving a large activity ground in the middle. Each group set up in a distinct area which allowed for scout patrols to pitch mini sites – all as per “Camping – Get it Right”

The weather was bright & slightly breezy, warm enough to remain in short sleeves until midnight – nice! Everyone caught up with each other & the first evening passed well with the scouts having a large wide game up on the hill. A smattering of rain at about 2am had dried fully by morning.

Saturday saw glorious sunshine, a good number of scouts running around carrying out activities based on scouting skills, leaders sitting back & allowing the scouts to get on with it. The aim of the whole weekend was to allow the scouts to work on team work, communication & the all important final ingredient – have fun...

Saturday night had everyone around the campfire & although the singing started off a little quite, by the end everyone put their all in to it. Alan, Daniel, Alex, Clive & Julian entertained the attendees & went through skits, repeat after me & action songs. 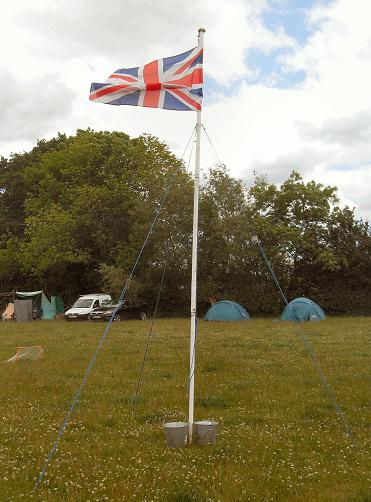 Clive’s Eskimo song is a particular treat which everyone enjoys; & a special well done to Alex & Daniel who are shaping up to be good campfire Chiefs. The evening was brought to an end with a wide game up on the hill.

Sunday started very hot, & although we experienced several showers the tentage dried & was packed away with the minimum of fuss. Everyone took part in a Scouts’ Own under brilliant blue skies. The scouts then caught up with the assault course that they didn’t have time to fit in on Saturday.

The weekend finished with everyone gathering round the flag in the rain, all were thanked for attending & our Chief Commissioner presented two leaders with their warrants & tasked all scouts with the challenge to bring their friends along to join in with Scouting!